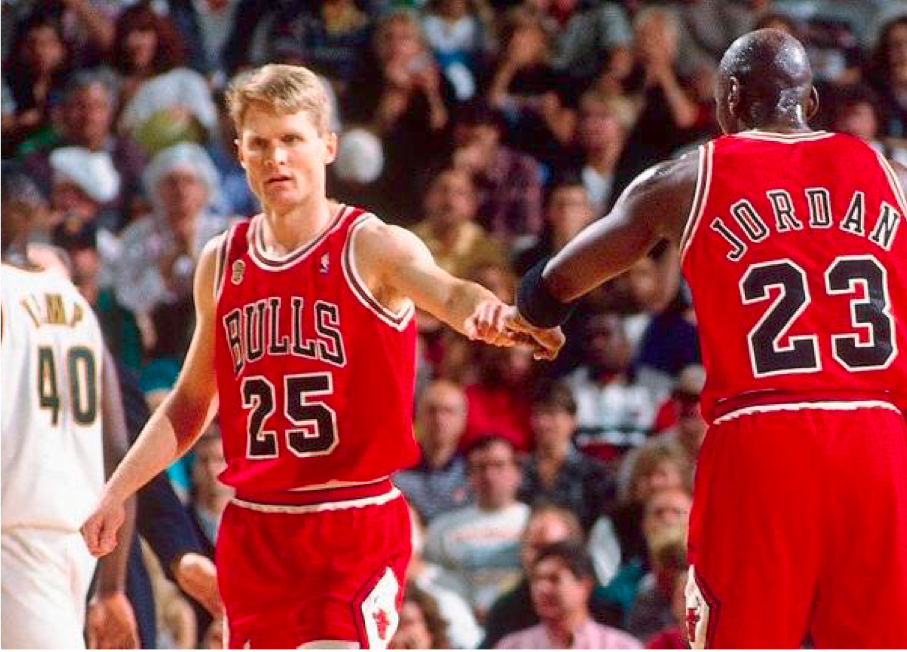 Steve Kerr had one of the most pressure-filled roles in basketball. In his 15 years in the NBA, Steve Kerr started only 30 games. Some games, he wouldn’t play at all. Most nights, his job was to come off the bench and knock down shots. If he did so efficiently, the night was a success, if he didn’t, the night was considered a failure.

Kerr, who describes himself as, “athletically challenged” was a pure shooter. However, he spent the first few years of his career passing the ball, especially when the game was on the line. He wasn’t being unselfish, he was afraid of failure and it filled him with anxiety.

In game 6 of the 1997 NBA Finals, Kerr and Michael Jordan’s Bulls were up against the Jazz. With only one more win needed to secure an NBA Championship, the Bulls had the ball with the game tied and 6 seconds left. Everyone expected Michael Jordan to take the shot, but after drawing the double-team, Michael Jordan kicked the ball out to Steve Kerr.

During the timeout, Steve recalls, “I remember thinking if I get the ball I’m going to shoot it. I don’t care.” When Steve Kerr caught the ball, he shot it without thinking twice. He made it, which won the bulls the game and the 1997 NBA Championship. “That was the turning point in my career,” he recalls.

Steve Kerr now leads the Golden State Warriors, who seem to play with no fear. In fact, it’s quite the opposite; one of the Warriors’ core values is joy. Their demeanor is playful with an evident love of the game. It’s been over 22 years since Steve Kerr hit that shot, but what he learned has heavily influenced how he leads his team. He never wants them to be afraid of taking risks. Steve Kerr wants his team to be free of the anxiety he had as a player.

So how did he get there? How did Steve Kerr go from a player who was too scared to shoot, to someone who is willing to take the big shots? He was always a great shooter, he just had to get out of his own way.

As a player, Steve Kerr read a book called The Inner Game of Tennis. He still reads the book again every off-season, and keeps extra copies with him to give away. The book is about getting the mind to work with the body instead of against. It’s about overcoming anxiety, lapses in focus, nervousness, self-doubt, and self-condemnation.

There are 3 mental skills Steve Kerr used to help him overcome his anxiety and fear of failure.

1. Remind Yourself of Past Successes

“Before every game, I would watch a tape of me playing well, being in the groove, to give myself that positive feeling, I wanted to fill my memory with good things so I could draw upon it. In Houston early one season, I shot an absolutely perfect free throw. After that, every free throw I took that year, I would say, ‘Houston,’ before I shot it. I wanted to put that picture in my head, that feeling.”

Once you are competing, it’s too late to work on your game, but you can focus on getting the clearest picture of the desired outcome in your mind. Feeding your mind with an image of what you want to happen gives your body the message without instruction so you don’t overthink it. When you ask someone who’s experienced being in the zone what they were thinking about, the answer is usually “nothing” or “I wasn’t thinking”. They are often described as “playing out of their mind” or being”unconscious”.

Evidently, some part of the mind is not active. Why? Someone in the zone is said to be “feeling it” not thinking it or remembering instructions- because images are more powerful than words and showing is better than telling. Their mind is focused on the mental image of the desired outcome.

It’s the art of relaxed concentration through visualization.

“Why give yourself one other thing to overcome out there? You have to overcome your own clutter in your own mind, and not add to it. Once the game starts, you have to put fear of failure totally out of your mind.” — Steve Kerr

The first step is to see your shot as it is: “miss” or “make” instead of “good” or “bad”. When you think of it as a “good” or “bad” shot, your brain will start to generalize. Instead of it just being one bad shot, it becomes, “My shot is bad,” then “I’m a terrible shooter’. When you label a shot as bad, you attach your emotions to it, which leads to an emotional reaction. Judgments can escalate from a missed shot to believing that you are a bad basketball player.

First the inner critic judges the event, then it groups them all together and makes a conclusion about yourself. This judgment becomes a self-fulfilling prophecy. If you allow the inner critic to conclude you are a bad basketball player, you’ll start playing like it’s true. You can’t play to your full-potential as long as the inner critic is doing all the talking. During your best performances, your mind was likely calm and quiet. This is why you have to learn to quiet that critic by letting go of judgements.

Being relaxed allows you to play with fluidity. The only way to relax is to be accepting. Quieting the inner critic does not mean you ignore errors, it means you see plays and shots as they are without attaching emotions to them. This way, you don’t have emotional reactions (anger, frustration, and discouragement), tightness, and the inner critic interfering with your performance.

3. Understand Failure is a Part of the Process

If you’re not failing, you’re probably not pushing yourself enough. If you never mess up in ball-handling drills, you’re probably only going at a comfortable speed. To get better you have to get out of that comfortable speed. If you never fail when you’re maxing out in the weightroom, you can’t find out the edge of your capabilities. If you’re not failing, you are limiting yourself. If you want to be a great basketball player, compete in everything; you will fail and that’s more than okay, it’s a sign you’re going beyond your perceived limits- that’s how you get better.

You make things better and improve faster when you fail.

A ceramics teacher proved this when he had his class mold clay into pots. He asked half of his class to focus on making the best possible pot and he asked the other half of the class to make as many pots as possible. They were both given equal amounts of time to work.

The group that was focused on producing a high quantity of pots, had much higher quality pots.

The group that was focused on perfecting a high quality pot, had assembled a useless pile of clay.

Why? Everytime the group who was focused on making a lot of pots finished one, they could identify their mistakes, then quickly correct it in the next one.

The group focused on quality had no failures to learn from. Failure is a great teacher.

Shooting is a great example of this. During the season, Steph Curry shoots 300 shots after practice, and in the offseason he increases it to 500. Do some digging on the greatest shooters in the game and you’ll find they simply put up a higher quantity than anyone else. As a result, their shot has higher quality. They learn through trial and error. They see misses and failures as part of the process of getting better.

Steve Kerr worked hard to develop the mental strength to overcome his anxiety and fear of failure. Mental strength is not something you’re born with, it’s a skill that you can develop.